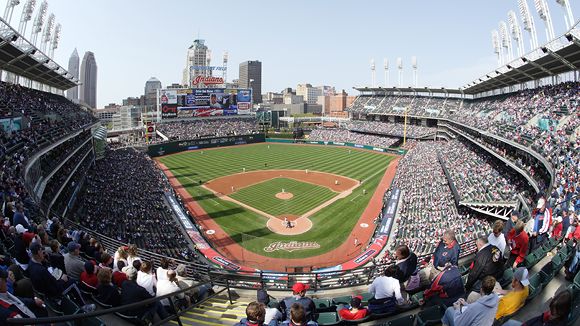 The stadium is part of the Gateway Sports and Entertainment Complex which also holds the home of the NBA’s Cleveland Cavaliers, Quicken Loans Arena.

The park was designed by architectural powerhouse HOK Sport, now called Populous, who has designed a number of both professional baseball and football stadiums.

The Indians extended their lease with the stadium in August of 2008 and will carry them up until 2023.

• Between 1994 and 2008 the stadium was originally known as Jacobs Field, named after team owners David and Richard Jacobs.

• Progressive Insurance Company which is based in Cleveland purchased the naming rights to the stadium on January 11, 2008.

• Between June 12, 1995 and April 4, 2001 the Indians sold out every single home game consecutively setting the MLB record for consecutive sellouts.

• The Indians have always done well at drawling big crowds, but they set their record for lowest attendance at the park on April 2, 2011 with only 9,853 fans in attendance.