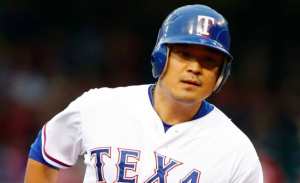 In a move that has become all too common this year, the Texas Rangers have placed outfielder Shin-Soo Choo on the 15-day DL. Choo broke his left forearm during Monday’s win over the Oakland Athletics when he was hit by a pitch from lefty Ross Detwiler. It will be the fourth time this season that the Rangers have placed Choo on the DL, and this time it’s likely that he will be out for the remainder of the season.

Detwiler, who is a former teammate of Choo after he began last season with the Rangers, felt horrible afterwards. “Somebody you played with last year, somebody that’s your friend, you hate for that pitch to get away from you,” he said. “It’s not a good sign when you get pulled out of the game.”

“Yeah, it’s obviously very challenging news,” Texas manager Jeff Banister said after the game. “From my vantage point, when he got hit, we obviously knew something was definitely wrong. I feel for Choo, fourth time this year, significant time on the disabled list. He’s such a key part of the ballclub and the organization. You feel for him and it’s obviously a gut punch, but one we are going to be challenged with.”

Separate injuries to his calf, hamstring, and back have limited to Choo to just 45 games this season. Despite the constant stops and starts to his season, Choo has remained productive whenever he’s been in the lineup. When he returned from the DL earlier this month after missing time with back inflammation, the Rangers were hopeful that Choo could provide a spark for them by returning to the leadoff spot, but now it looks as though Texas will have to look elsewhere for a permanent solution at the top of the lineup.

“He means a lot to us,” said shortstop Elvis Andrus, lamenting another trip to the DL for Choo. “He sets the tone for our lineup. He is the perfect leadoff hitter. That’s going to hurt our lineup, but we have to keep going. It’s late in the season, we have to keep pushing. Somebody will step up for us.”

“It’s a challenge not having Choo in the lineup, in the leadoff spot or not,” Banister said. “Professional at-bat, ability to get on base, a power threat. It changes the structure of our lineup. We’ll need to find somebody to solidify the leadoff spot.”

The Rangers will recall Ryan Rua to take Choo’s place on the roster. Rookie sensation Nomar Mazara will likely shift back to right field and get a majority of the playing time there, although Carlos Beltran is also an option there if the Rangers want to open up the DH spot for Jurickson Profar. Some combination of Rua, Delino DeShields Jr., and Drew Stubbs will handle left field, with both Profar and DeShields being possible candidates for the leadoff spot.

Obviously, the Rangers have become accustomed to playing without Choo this season, but to lose him to yet another injury is still a blow for them. Texas maintains a comfortable 5.5 game lead over the surging Seattle Mariners and look good to win the AL West. However, the absence of Choo will make securing that playoff spot and advancing in the postseason that much harder for the Rangers.