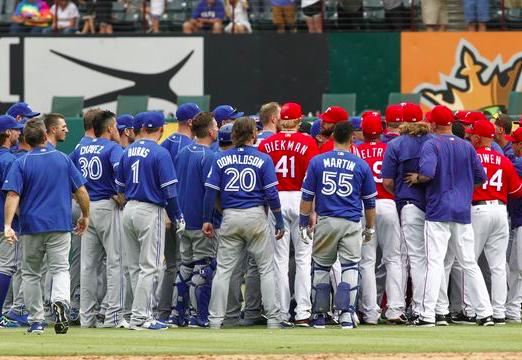 Posted on October 9, 2016 by Bryan Zarpentine

The best team in the American League during the regular season is on the verge elimination two games into the postseason. The Texas Rangers lost Games 1 and 2, at home no less, to the Toronto Blue Jays, who have carried a great deal of momentum after their walk-off win in the wild card game. The Blue Jays now have two chances to close out the series at home and advance to the ALCS.

Not only does Toronto have a big cushion in the series, but they have also benefited from building a big cushion early in Games 1 and 2. The Blue Jays raced out to an insurmountable lead early in Game 1, and by the middle of the 5th inning in Game 2 they had a 5-1 lead. This made it much easier for the Toronto bullpen to close out the game when the Rangers started to rally in the late innings.

No team wants to play from behind, but it’s especially important for the Rangers to not fall into a deep hole, considering how poor their bullpen has been this season. Texas obviously needs better starting pitching, but they also need to score runs early in the game and start playing with a lead, or else they have little chance of extending the series.

Already up 2-0 in the series, the Blue Jays will send Aaron Sanchez to the mound in Game 3. Sanchez has arguably been the team’s ace this season, and while this will be his first career postseason start, he threw 7.1 innings out of the bullpen in last year’s postseason, allowing just one unearned run on seven hits. He should have no trouble handling the moment, especially with his team leading in the series.

The Rangers will counter with Colby Lewis, who had arguably the best season of his career in 2016, despite missing more than two months with a lat strain. He faced Toronto in early May and did a fine job, allowing just two runs over seven innings, taking a no-decision. However, he has struggled since returning from injury late in the season. Unfortunately, the Rangers don’t have many other options in their rotation.

Lewis may be the biggest X-factor in Game 3. Cole Hamels and Yu Darvish have struggled in the first two games of this series, and it’ll be up to Lewis to turn the tide. Texas showed some signs of life offensively in Game 2, as the Rangers collected 13 hits despite only scoring three runs. However, they’re not going to beat the Blue Jays if they can’t slow down the Toronto offense. If Lewis isn’t at the top of his game, this series could be over Sunday night.

The Blue Jays are home favorites to close out the series in Game 3, and that’s exactly what’s going to happen. Even if Sanchez doesn’t pitch a gem against a strong Texas lineup, the Blue Jays are equally capable of lighting up the scoreboard. The Texas pitching staff has not been able to stop the Blue Jays at all this series, and there’s no reason to expect that to change with the Blue Jays coming home. Toronto wins 9-5.