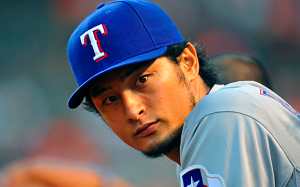 In just his third start with the Texas Rangers since undergoing Tommy John surgery last March, Yu Darvish was forced to leave his start Wednesday night early with an apparent injury. The Rangers removed Darvish after the 5th inning of Wednesday’s game against the Houston Astros as a precaution after he experienced tightness in his shoulder.

Darvish originally felt a tightness in his neck during the 4th inning, and that turned into tightness in his shoulder an inning later. He was seen shaking his arm after throwing a breaking ball to strikeout George Springer. Darvish then walked Jose Altuve, prompting a visit from Texas pitching coach Doug Brocail, the team’s athletic trainer Kevin Harmon, and Darvish’s translator. After a couple of warm up pitches, Darvish was allowed to complete the inning before he was pulled from the game.

“I noticed some body language and he started stretching his arm a little bit, which is a little uncharacteristic. It looked like he started regulating the fastball a little bit, so I sent them out to talk to him,” Texas manager Jeff Banister explained after the game. “When he came off, he talked about a little tightness. It was precautionary, so we got him out of the game.”

Banister said the team will wait 24 hours until evaluating Darvish, but admits, “Any time a player comes off the field, there is concern,” adding, “I’m not going to overplay it or underplay it in any one direction until we get re-evaluation.” The manager also commented on how Darvish did not command his fastball Wednesday night the way he has in the past. Banister noticed the same problem in Darvish’s last start as well.

Darvish admitted after the game to taking a little off his fastball after he felt the shoulder tightness in the 5th inning. But other than that, Darvish downplayed his early exit as best he could, saying, “Everybody told me that after the Tommy John surgery, you go through all those small things from different places on your body. I think it’s one of those things, and I’m not too concerned about that.”

After the game, Darvish said he does not expect this to be anything other than a temporary set back. “If I had to, I feel like I could make my next start,” he said. “I think I need to take that tightness out of my neck area, and that’s going to work on my shoulder.”

Darvish may not be too concerned, but Bannister and the Rangers certainly appear to be a little worried. Not only was Darvish forced out about 20 pitches before maxing out on his pitch count, but his lack of fastball control over his last two starts may also be reason to worry. Darvish leaving his start early may end up being no big deal, but until he makes his next start pain free and consistently shows the command he’s had in the past, the Rangers have at least some reason to worry.

Check out the latest MLB Odds and top plays for the remainder of the 2016 Major League Baseball season from the top experts here at Sports Information Traders.