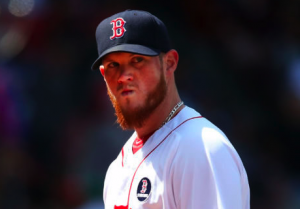 On the same day the Boston Red Sox traded for Arizona Diamondbacks closer Brad Ziegler to help reinforce their bullpen, the team learned they would be without closer Craig Kimbrel for the next three to six weeks. Kimbrel hurt his left knee during pre-game drills on Friday, and the Red Sox learned Saturday that Kimbrel will require surgery to repair a meniscus tear. Kimbrel will have the surgery Monday and is expected to miss anywhere between three and six weeks, including Tuesday’s All-Star Game.

“I was just in the outfield during BP and took a step for a ball that was a ground ball that was hit. I took a step, heard a pop and didn’t think it was anything serious until I got in, evaluated it, got the MRI, saw what it was,” Kimbrel explained.

Red Sox manager John Farrell called the injury an “anomaly” and says it won’t change the custom of pitchers shagging fly balls during batting practice. “This is what our players go through normally day-in, day-out, traditionally in the game. We can’t put guys in bubbles,” Farrell said.

“It’s the first time I’ve been on the DL in my career, so it’s obviously frustrating,” Kimbrel said Saturday. “I’m kind of glad it’s nothing too serious. It’s something that I feel like we can go in, get it scoped out, get it cleaned out.” On the season, Kimbrel has 17 saves and has posted a 3.55 ERA.

Despite the rather coincidental yet fortunate acquisition of Ziegler, Farrell says Koji Uehara will serve as Boston’s closer while Kimbrel is on the DL. Uehara got the save in Boston’s win over the Tampa Bay Rays, while Ziegler hadn’t yet reached the stadium and won’t be activated until Sunday. Ziegler will be the primary setup man and get chances to close if Uehara is unavailable, which also appeared to be the plan for him before Kimbrel went down. The Red Sox also have Clay Buchholz in the bullpen, where he has been more effective this season than as a starter.

Farrell says the team has no plans to rush Kimbrel back, and that he will return when he’s ready to face major league hitters. Kimbrel says he could push through the pain, but also says he fears the injury could alter his mechanics if he tried to pitch with it. Still, the Red Sox closer is eager to return as soon as possible. “They’re saying three to six weeks. Let’s hope it’s more on the three-week side, if not a little faster than that,” Kimbrel said. In the meantime, the Red Sox will have to hope that the trio of Uehara, Ziegler, and Buchholz is enough in the back end of their bullpen and can keep them in contention until Kimbrel is healthy enough to return.