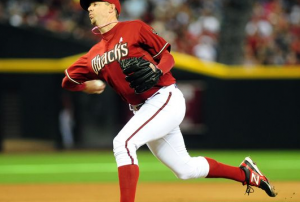 The trade was actually in place before Red Sox closer Craig Kimbrel hurt his knee during pre-game drills Friday, prompting the team to send him for an MRI. The Red Sox don’t know yet how serious the injury may be, but it will likely be enough to keep him from pitching in Tuesday’s All-Star Game. There is also some concern setup man Junichi Tazawa, who has missed nearly a week of action with shoulder discomfort.

The timing of the trade is somewhat coincidental, but the Red Sox appear to be acquiring Ziegler at the right time. In the event Kimbrel has to go to the DL, Ziegler is an obvious candidate to fill that role for the Red Sox. However, Boston acquired him more as a replacement for Carson Smith, who was lost in May to Tommy John surgery.

Ziegler has notched 18 saves in 20 opportunities for the Diamondbacks this year. He hasn’t been quite as dominant as he was a year ago, but he remains a quality late-game reliever who is particularly tough on right-handed batters. He’s expected to join the Red Sox on Saturday for the final two games of their series against the Tampa Bay Rays.

The 36-year old reliever said he wasn’t shocked he was traded, but was a little surprised at the timing of it. “I guess that’s part of this game that you’ve got no control over, so there’s no point in worrying about it or dwelling on it, but I thought there was a strong likelihood over the course of the next couple of weeks that something would happen,” he said after learning he was coming to Boston. “It was more the timing that caught me off guard than what actually happened.”

Ziegler also says he’s excited to join a team that’s in the playoff picture. “From a baseball standpoint, you have a team that’s just a couple of games out of first, and there’s a lot of opportunity there,” he said. “I think that’s probably why they [made] some adjustments now so we can maybe make up some games before the end of July.”

From Arizona’s perspective, the trade is the first sign of concession in what was supposed to be a fruitful 2016 season following all the high-profile moves the team made during the offseason. However, things have not worked out as planned for the Diamondbacks, who have fallen into last place in the NL West and own the third worst record in the National League.

For Boston, the acquisition of Ziegler is a big step toward fortifying the bullpen, especially with the sudden uncertainty over Kimbrel. However, it doesn’t figure to be the last move the Red Sox make before the trade deadline. Boston has slipped into third place in the AL East, and while they still hold the second wildcard spot, the Red Sox may still need to address their starting rotation, as well as the rash of injuries that have affected them at positions around the diamond, most notably left field.