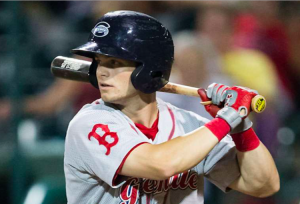 The Boston Red Sox are planning to call up outfield prospect Andrew Benitendi in time to join them for their game Tuesday night against the Seattle Mariners. Benitendi was the 7th overall pick in the 2015 draft out of the University of Arkansas. According to MLB.com, he is the 2nd rated prospect in Boston’s farm system, the top outfield prospect, and the 7th overall prospect in baseball. The Red Sox have designated Michael Martinez for assignment to make room on the roster for Benitendi.

The left-hand hitting Benitendi is expected to play left field when the Red Sox face right-handed starting pitchers, which means his first big league start will likely come Wednesday when Boston is scheduled to face Seattle’s Hisashi Iwakuma. The Red Sox have struggled to find a permanent solution in left field all season, in large part because a slew of injuries at that position. Benitendi will likely split time in left field with Brock Holt and Bryce Brentz, although the versatile Holt is likely to return to a utility role.

Benitendi will come to the big leagues with just 570 career at bats in the minor leagues. He began the season in advanced-A ball but was soon promoted to double-A. He will join the Red Sox straight from double-A, where he hit .295 with eight home runs, five triples, and 18 doubles. In addition to possessing above-average power and speed, Benitendi is also described as a strong defensive player, although he’s played primarily center field and has just four games of experience at left field in the minors.

A promotion to the majors a little over a year after being drafted makes it seem as if the Red Sox are rushing Benitendi, but Red Sox president of baseball operations Dave Dombrowski is confident the 22-year old is ready. “Our people kept coming up and saying, ‘We think he can play at the big league level and we think he’s ready,'” Dombrowski explained “Now, don’t look for him to hit in the middle of the lineup like he will eventually. But he’s a well-rounded player, he’s a good defensive player, he runs the bases well, he has a good arm, we’ve been working him out at left field and he’s been able to play the wall well in Portland there.”

Dombrowski adds that the move is not all that unusual. “I’ve really brought a lot of guys up from Double-A. Triple-A is a very important league, but it’s also a situation where if they can hit at the Double-A level, if they can play at the Double-A level, it shows that they have the capabilities to do that. Now it doesn’t mean that they’re ready all the time; there’s always an adjustment period, but I always think that Double-A is a real proving ground.”

The promotion of Benitendi comes one day after the non-waiver trade deadline. The Red Sox were reportedly attempting to acquire a left fielder, most notably Carlos Beltran, but were unable to work out a deal. The inability to swing a deal appears to be what has prompted the team to call up Benitendi. How well Benitendi will do when he reaches the majors remains to be seen, but the Red Sox appear willing to take their chances during a pennant race with one of the most promising prospects in baseball. Boston is currently one game behind the Baltimore Orioles in the AL East and tied with the Toronto Blue Jays for the two wild card spots.