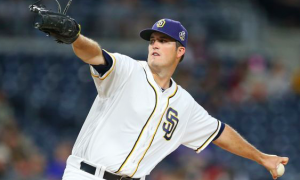 The Boston Red Sox pulled off the biggest move of the trade season thus far on Thursday, acquiring left-handed pitcher Drew Pomeranz from the San Diego Padres in exchange for pitching prospect Anderson Espinoza. Many considered Pomeranz to be the best pitcher who may be available in a trade this summer, giving the Red Sox rotation an immediate boost and a leg up in the AL East, where the Red Sox, Baltimore Orioles, and Toronto Blue Jays are separated by just two games heading into the second half of the season.

Pomeranz was in the midst of a true breakout season in his first year in San Diego after being traded to the Padres from the Oakland Athletics last offseason. In 17 starts this year, Pomeranz owns a 2.47 ERA with 115 strikeouts in 102 innings of work. Pomeranz won’t be eligible for free agency until after the 2018 season, so the Red Sox are adding him to their rotation for both this season and at least the next two years as well. Red Sox president of baseball operations Dave Dombrowski said Pomeranz will make his Boston debut next Wednesday when the Red Sox host the San Francisco Giants.

Since Pomeranz is in the midst of an exceptional season and is under team control for two more years, the price to get him was quite high, forcing the Red Sox to part with Epinoza, their top pitching prospect. “I’d rather trade three [lesser]-type guys than Anderson, but that wasn’t appealing to San Diego,” Dombrowski explained. “They really wanted more of the focus of the premium guy. There’s always risk with pitchers, no matter how old they are. We know that Drew hasn’t thrown this many innings. We think he can handle it. We also know there’s a risk in Anderson, a young pitcher that we like a great deal.”

Espinoza is an 18-year old righty who the Red Sox signed out of Venezuela for $1.8 million two summers ago. He’s spent all season at full-season A-ball, where he’s held his own with a 4.38 ERA in 17 starts, a stunning accomplishment for a pitcher his age. Espinoza regularly throws his fastball in the mid to upper 90s. He also has a curveball and changeup that are both advanced pitches for a pitcher his age and show signs of developing into plus offerings. There is always a high amount of risk with young pitchers, especially when are as small as Espinoza (listed at 6′ 0” 160 lbs.) and throw as hard as he does. However, the sky is the limit in terms of his ceiling, so the payoff for the Padres down the line could be massive.

Meanwhile, the Red Sox have struggled all season to fill the final two spots in their rotation behind the trio of David Price, Rick Porcello, and Steven Wright. The acquisition of Pomeranz immediately upgrades the depth in their rotation and also gives them a pitcher who has performed like a frontline starter this season. Boston has already acquired Aaron Hill to give them more depth on their bench and Brad Ziegler to reinforce their bullpen, and the trade for Pomeranz is another sign that the Red Sox are all-in on the 2016 season. The addition of Pomeranz may end up being the move that gets the Red Sox into the postseason and deep into October.