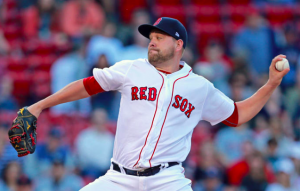 The injuries to the Boston Red Sox pitching staff just keep on rolling. The club announced Thursday that starter Brian Johnson has been placed on the 10-day DL with a shoulder impingement. The Red Sox also announced Thursday that reliever Tyler Thornburg will undergo surgery for thoracic outlet syndrome, ending his season before it began.

Johnson becomes the latest in a long line of Boston starters to spend time on the DL this season. He was forced to leave Wednesday’s start against the Phillies after just 2.2 innings. The Red Sox don’t believe the shoulder injury is anything too serious. Nevertheless, it creates yet another opening in the team’s starting rotation. Johnson was already a rotation fill-in with Steven Wright out for the season and Eduardo Rodriguez on the DL with a knee injury.

“Just the shoulder in general,” Johnson said, describing his shoulder discomfort. “I don’t really know if there’s a certain spot.”

Johnson believes he’ll bounce back quickly. But the Red Sox aren’t going to take any chances. The club has sent him back to Boston to be further evaluated. In four starts with the Red Sox this year, including Wednesday’s abbreviated outing, Johnson is 2-0 with a 4.29 ERA.

The Red Sox have called up Austin Maddox to take Johnson’s spot on the roster. However, Maddox will join Boston’s bullpen, leaving the Red Sox without a fifth starter for the time being. Johnson will miss at least one turn through the rotation, while Rodriguez won’t be ready for at least two more weeks. The Red Sox better hope that the two lefties can recover quickly because they’re running out of options in their rotation.

Aside from Wright, Rodriguez, and now Johnson, David Price has also missed time due to injury this season. Drew Pomeranz also began the season on the DL, as his health has been problematic since coming to Boston last summer. The steady stream of injuries to the starting rotation has been the biggest concern this year for the Red Sox by far.

Meanwhile, the Red Sox have confirmed what most fans were beginning to suspect: Thornburg will not be pitching at all this season. The Red Sox acquired Thornburg during the offseason in a trade with the Brewers. The club expected him to be a key setup man in front of closer Craig Kimbrel. However, Thornburg was shut down with a shoulder strain toward the end of spring training. He has not been able to return to the mound following a series of setbacks.

Surgery for thoracic outlet syndrome is starting to become more and more common for major league pitchers. The procedure will rule out any chance of Thornburg pitching this season. However, the Red Sox believe he’ll be ready for the start of the 2018 season. Last season with the Brewers, Thornburg posted a 2.15 ERA, asserting himself as one of the better relievers in baseball. He has two more years of arbitration before he can become a free agent.

Boston’s bullpen has been just fine without Thornburg this year. While it would have been nice to have him return later in the season, the Red Sox can move on without him. But the continued series of injuries to starting pitchers like Johnson has made it impossible for the Red Sox to live up to expectations this season. Boston is very much in contention for a playoff spot, but they need to keep their starting pitchers healthy if they’re going to be a World Series contender, and that continues to be a problem for them.