Sunday night saw the second season of the HBO series “Ballers” debut. The show follows Dwayne “The Rock” Johnson, a former football star, as he embarks on a second career as a financial manager for current players. When the first season debuted, it was met with a fair share of criticism at first, but by time the season was done the general perception was that it was a good–but not great–show.

With the ever-popular Dwayne Johnson in the starring role, the first season sold itself. However, after getting good but not great reviews for its first run, the show needed something else to promote its second season. What sells better than a little controversy? 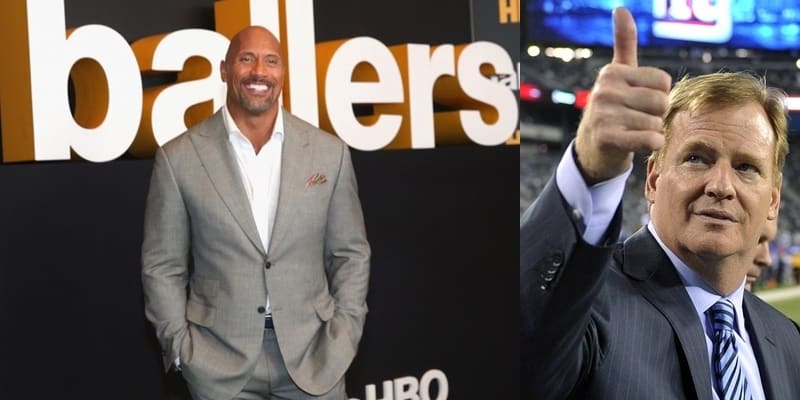 With the comments Executive producer Mark Wahlberg made on the ESPN radio show, Mike and Mike, Friday, he did a pretty good job of creating one (Hollywood Reporter):

“The first season of the show, the only calls I was getting were from guys like Roger Goodell saying, ‘You can’t do this,’ and various owners in the league, too,” Wahlberg said. He did not explain what “this” was exactly.”

The league is, of course, saying that no such talk occurred; that Roger Goodell did not try to get Ballers shut down. However, when you consider the league’s history with shows that portray professional football players in a not-so-good light, it is not hard to imagine Goodell making the call.

Back in 2004, ESPN canceled a very popular show, Playmakers, which focused on a fictional team in a fictional league. It was critically acclaimed and very popular among viewers—and it was axed after one season.

Why? The NFL didn’t like it. The league felt it portrayed professional football players in a negative light, so the league pressured ESPN into canceling it. Rather than risk offending a major partner, the network did just that.

What was so bad about it? Well—it featured a young player with a drug and attitude problem, a veteran player that was threatened by him, domestic violence issues, a womanizing quarterback, players paying off “baby-mamas” to stay quiet, injury and pain management issues, a religious team leader that was gay and so much more.

Sounds just like the many stories that grace the internet every year, but the league and several players cried foul and said it was a poor depiction of the life.

Fast forward to 2015 and another partner of the NFL’s, HBO, debuts a show that depicts NFL players—and this one used actual NFL team names unlike Playmakers—as they deal with issues like womanizing, infidelity, drug use, financial problems, injuries, and life after football.

The NFL has brought an early end to a football-based show before which makes it easy to see the league trying to do it again. However, this time, they are dealing with a partner they don’t have as much sway with. HBO and the NFL team up for Hard Knocks every year, but that’s it. HBO would survive just fine if the NFL took Hard Knocks to another network.

Before we condemn the most hated man in football, Roger Goodell, shouldn’t we at least consider that the league is telling the truth and Wahlberg is creating a controversy for publicity?

“We were saying it’s actually a good thing for the league and the players because hopefully, you get the word out there with the crazy stuff and the financial side of it, we’ll hopefully get these guys to realize they gotta be more careful with what they do with their money.”

So it’s a PSA for millionaire athletes? Fans already know the players have more money than they know what to do with and are terrible at managing it. If the show is as accurate as Wahlberg claims, shouldn’t athletes already be familiar with the show’s subject matter?

“We’re privileged to get the real story,” said Wahlberg. “We want to make sure the key is to make it as authentic as possible no matter how outrageous it gets. We always surround ourselves with real guys….”

The NFL doesn’t like any form of bad press which includes the depiction of professional football players as womanizing, drug-using degenerates in a television program qualifies as. But when it comes to television–the only two things that sell better are sex and controversy. So why not pump up the show’s media exposure by claiming that the leader of the No Fun League hates the show?

What do people like to do more than hate the man in power? They like to do what he does not want them to do. So if he hates a television show, they are going to watch it.

The NFL almost handed Wahlberg’s comments right by ignoring them but then decided to deny them, effectively giving Marky Mark what he wanted–press.