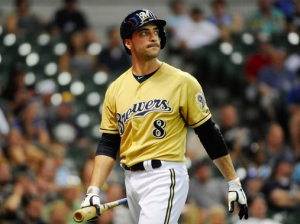 After battling nagging injuries for much of the past two weeks, Milwaukee Brewers left fielder Ryan Braun has finally landed on the DL. The Brewers placed Braun on the 10-day DL Friday with a left calf strain, although the six-time all-star has also battled issues with his forearm and trapezius since the calendar turned to May. Journeyman infielder Eric Sogard has been called up by the Brewers to take Braun’s spot on the roster.

Braun underwent an MRI on Thursday that revealed the strained calf. He said the calf felt tight during Milwaukee’s win over the Red Sox on Tuesday. During Wednesday’s win over the Red Sox, Braun was lifted for a pinch runner in the 5th inning because of the calf, prompting him to miss Thursday’s game and receive an MRI. It was Braun’s second MRI in less than a week, as he also had his elbow examined last weekend, revealing a flexor muscle strain in his right elbow.

In total, Braun has missed six of Milwaukee’s last nine games due to injury. At this point, the Brewers have decided that the best course of action is simply to have the former MVP rest for an extended period of time so that he can recover from his nagging injuries as much as possible.

“I think the smart decision becomes to not let it get significantly worse,” Braun said. “That was kind of the way it went down.”

Despite the injuries, Braun is off to a great start this season, hitting .287 with seven home runs, good for an OPS of .948. However, he admits to his performance has diminished in recent days because of the injuries.

“If you guys watched Tuesday or Wednesday,” Braun told reporters Thursday. “I still can’t really throw much. I think the combination of the two of those makes it challenging when I can’t really run or throw, so hopefully, if I get a little bit of downtime, I’ll be able to get back to full strength throwing and running.”

While Braun is out, utility men Hernan Perez and Nick Franklin figure to get most of the time in left field, although neither has much experience in the outfield. Perez has four career starts in left field while Franklin has 20. Offensively, the switch-hitting Franklin has struggled to get going this season. Perez, on the other hand, is hitting .261 with 12 extra-base hits in just 92 at-bats this year. Nevertheless, both represent a considerable drop-off from Braun, at least when Braun is healthy.

The Brewers could also look to give Eric Thames, who’s arguably been the best player in baseball to this point in the season, more time in the outfield. Thames has played primarily first base this year, but he’s started four games in the outfield for the Brewers. Playing Thames in left field while Braun is out would create more playing time for Jesus Aguilar to play first base.

If nothing else, the Brewers have a number of options for how to replace Braun for the time being. However, outside of Thames, Braun’s been their most impactful offensive player this season, despite being hampered by injuries the past two weeks. Braun is a big reason why the Brewers are one of the biggest surprises in baseball this season and enter Friday a game above .500. Surviving an indefinite stint on the DL without him will be a difficult obstacle for the Brewers to overcome.