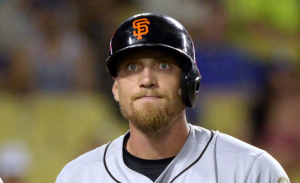 With time running out to get their season turned around, the San Francisco Giants are getting an important part of their lineup back. The Giants activated right fielder Hunter Pence on Sunday after he spent more than three weeks on the DL with a hamstring injury. With Pence back on the active roster, the Giants have optioned rookie Christian Arroyo back to triple-A.

The Giants are hopeful that the return of Pence will give a jolt of life to a team that entered Sunday tied for last place in the NL West and 12 games out of first place. Unfortunately, Pence was off to a sluggish start this season prior to the injury. In his first 37 games of the season before going to the DL, Pence was hitting just .243 with an OPS of .627.

Of course, the players the Giants used to replace Pence in their outfield fared even worse over the past few weeks. Pence was not in the starting lineup Sunday against the Phillies, one of his former teams. But he has pronounced himself ready to play after taking a few weeks to let his hamstring heal. In three minor league rehab games, Pence was 3 for 10 with two walks.

“Running’s not an issue at all,” Giants manager Bruce Bochy said of Pence on Saturday. “It’s just a matter of getting his timing at the plate. He says he feels good. He had a couple strikeouts, but he says he feels good. All is well. He’s doing good with the hamstring.”

Presumably, Pence will return to being San Francisco’s everyday right fielder when the team continues its road trip Monday in Milwaukee. Of course, even with Pence back from the DL, the Giants still have a question mark in their outfield. Veteran Gorkys Hernandez and youngsters Orlando Calixte and Austin Slater should all see time in left field in the weeks to come, although none appear poised to grab the job and run with it, as the Giants continue to struggle to find consistent production from their outfield.

“I wish I could have come back sooner,” Pence said. “It was a little more complicated than we thought. But I’m glad I’m feeling better and we made the right decision.”

As for Arroyo, the highly regarded prospect had a few big hits for the Giants since getting his first big league call-up towards the end of April. However, he returns to triple-A after hitting just .192 with an OPS of .548. Nevertheless, both he and the Giants view the last six weeks as an important learning experience for someone who could turn into a cornerstone player for the Giants in the years to come.

“For me, it was good to get here and be exposed to the best arms in the game,” Arroyo said. “I understand now what it takes to be a major-leaguer. I’ve just got to get back to doing what I do and working on being more patient. When I was scuffling I got swing-happy and I was putting pressure on myself, which is something I didn’t need to do.”

Bochy has been pleased with Arroyo’s contributions while he was with the Giants but admits that the 22-year old infielder has plenty left to work on in the minors.

“He was a shot in the arm when he came up here,” Bochy said of Arroyo. “He gave us some big hits, big home runs. I loved the way he played defense wherever we put him: third, short or even second. He was ahead of the curve being here already. He hasn’t had a full year of Triple-A. That’s why he’s going back down. We want to continue his progress toward being an everyday major-league player.”

For the time being, the Giants will be better off with Pence back in the lineup every day and Arroyo getting more seasoning in the minors. However, the Giants are still running out of time to get things turned around and be in the running for a playoff spot the second half of the season. Getting Pence back from the DL will certainly help, but it may not be enough to save San Francisco’s season.