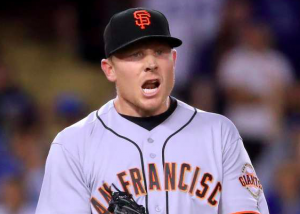 With their season quickly spiraling out of control, the San Francisco Giants have lost their most important offseason addition, closer Mark Melancon. The Giants placed Melancon on the DL Tuesday night with a mild pronator strain, an injury to the muscle that helps to flex the elbow. The Giants are hoping for the best but don’t have a clear timeline on when Melancon will be ready to return.

The trip to the DL, which is the first in Melancon’s career, is not in response to any specific event. Melancon says he’s experienced discomfort in that part of his arm dating back to spring training. Last week, Melancon decided that the pain had become too much to ignore. He hasn’t appeared in a game since last Wednesday when he saved a win for the Giants over the Dodgers. While the team was in Cincinnati over the weekend, Melancon underwent an MRI that revealed inflammation.

“It was one of those things that (wasn’t) bad enough to do anything but treat on a daily basis,” Melancon said after officially going on the DL Tuesday night. “If I’m not at full strength, I could end up hurting us more, and I’m leaving the bullpen a man short, or half a man short, if I continue to go like this.”

Of course, the Giants haven’t needed a closer much over the last week. Since Melancon’s save Wednesday against the Dodgers, the Giants are winless, being outscored 41-5 in five games. San Francisco closes out a series with the Mets on Wednesday and is in danger of being swept in back-to-back series.

“We want to get this cleared up so it’s not nagging him all year,” Giants manager Bruce Bochy said. “We think he should be ready when his time (on the DL) is up.”

Prior to being sidelined with the arm injury last week, Melancon was putting together a fine season despite a lack of save opportunities. Melancon currently has six saves in eight opportunities with a 2.53 ERA. It’s a bit of a drop-off from recent seasons, which is understandable considering the arm issues, but it’s certainly better than what the Giants were getting from the back end of their bullpen last season.

Derek Law is poised to fill in as San Francisco’s closer while Melancon is out, should the Giants end up needing one. Law, Hunter Strickland, and Cory Gearrin are all in the midst of solid seasons serving as setup men for Melancon. However, San Francisco’s bullpen still ranks in the bottom half of the National League in ERA. The Giants would certainly benefit from a fully healthy Melancon capable of pitching like he did before signing a four-year, $62 million deal over the winter.

“It’s really tough,” Melancon said. “I’ve never been on the DL, and it’s been a huge goal of mine to do that my whole career. But I expect to be back as soon as possible. I feel like this team is going to turn it around. And once we do that, I want to make sure that all cylinders are clicking.”

The Giants are currently 12 games under .500, nursing a five-game losing streak, and have the lowest winning percentage in baseball. The team’s problems extend far beyond Melancon, but not having their high-profile closer fully healthy this season has not helped their cause. If a short DL stint can help return Melancon to full health, it could be a small step in the right direction for a team whose season is quickly getting away from them.