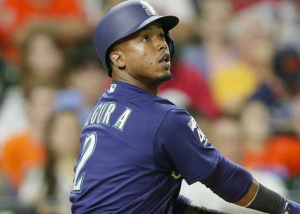 The 2017 season hasn’t exactly gone according to plan for the Seattle Mariners. However, the offseason acquisition of shortstop Jean Segura has worked out just as the team hoped. The Mariners are now ready to commit to Segura as a cornerstone of their future. Multiple outlets have confirmed that the Mariners and Segura have agreed to a five-year contract extension worth more than $70 million. The deal also includes a full no-trade clause for Segura.

Segura has one more year of arbitration left, and so he would have been a free agent following the 2018 season. With the five-year extension, Segura will stay in Seattle through at least the 2022 season. Reports indicate there is a $17 million team option for the 2023 season. In any event, Segura’s long-term future appears to be the Mariners.

The 27-year old shortstop originally broke out in 2013 while playing for the Milwaukee Brewers. He hit .294 with an OPS of .752 and 42 extra-base hits that season. He was an all-star that year and appeared to be on his way toward becoming one of the best shortstops in baseball. But Segura failed to build upon that breakout season, delivering disappointing campaigns for the Brewers in both 2014 and 2015.

Milwaukee traded Segura to the Diamondbacks prior to the 2016 season. Segura had a sudden resurgence in Arizona last season, hitting .319 and leading the National League in hits. He also posted career highs in home runs with 20 and doubles with 41.

After the five-player trade that sent him to Seattle, Segura has picked up where he left off last season. Through 43 games this season, Segura is hitting .341, which leads the American League. He’s also posting an OPS of .852, proving that last year’s numbers in Arizona were not a fluke. With Segura replicating his numbers from a season ago, the Mariners are confident that committing to Segura as their long-term shortstop is the right move.

The timing of the extension is a little unusual. The new deal comes less than a week after Segura was placed on the 10-day DL with a high-ankle sprain. However, the Mariners are hopeful that Segura will return sooner than expected. There’s also no reason to believe the injury will have a negative impact on Segura in the long run.

“He’s back to a normal gait with his walk,” Mariners manager Scott Servais said Tuesday. “He’s not running or anything yet, but we’ll pick up the intensity in his workout in the pool and weight room the next day or two. I’m optimistic. I don’t think he’s going to be out as long as was initially said, but that’s just going off of what Jean is telling me and how he’s feeling.”

With the extension for Segura, he now becomes part of Seattle’s core for the future. Second baseman Robinson Cano is signed through 2023, while third baseman Kyle Seager is set to stay in Seattle through at least the 2021 season. Segura will join those two in Seattle’s infield for a long time to come. The Mariners are also high on first base prospect Dan Vogelbach, giving the club great stability in its infield for the foreseeable future.

The Mariners have been defined by roster turnover under GM Jerry Dipoto. But signing Segura to an extension is a sign of Seattle putting together a core group of players. Segura is now part of that core, along with Cano, Seager, and ace Felix Hernandez, that will lead the Mariners into the future.

“Over the past two seasons, Jean has been one of the premier offensive players in baseball,” Dipoto said. “His combination of average, power and speed (are) extremely difficult to find, especially as a top-of-the-lineup hitter at a key defensive position like shortstop. We are all quite excited about having him here with the Mariners and believe he is a key ingredient in our ongoing effort to build a championship-level roster.”