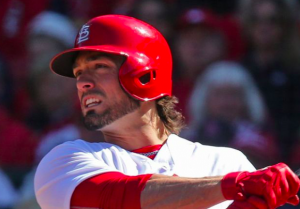 After what had to be an embarrassing demotion all the way back to A-ball earlier this year, Randal Grichuk is heading back to the big leagues. According to reports, the St. Louis Cardinals have recalled Grichuk in time for Sunday’s series finale against the Pittsburgh Pirates. The Cardinals are hoping to avoid getting swept by their division rivals and losing their fourth straight game.

At the end of May, Grichuk was demoted all the way back to A-ball. At the time, he was hitting .222 with an OPS of .653. The move was intended to help Grichuk relax and hit the reset button on his season, and perhaps even his career. The Cardinals wanted to give Grichuk a chance to work on his fundamentals like his strike-zone management.

After the demotion, Grichuk ended up playing just one game in A-ball. He spent most of his time there reworking his swing and trying to recapture what made him one of the most promising outfielders in the big leagues just a couple years ago. Soon enough, Grichuk was promoted to triple-A, where he’s played 14 games.

During that time, Grichuk has hit .270 with six home runs. Five of those home runs have come over the last six games. Of course, no one in the Cardinals organization is surprised of the power Grichuk has shown while in the minors.

“I don’t think any of us had a doubt that he would go to (triple-A) Memphis and hit homers,” Cardinals manager Mike Matheny said Friday.

Of course, Grichuk has also struck out 20 times in those 14 games. He’s drawn just four walks, including one intentional walk, during that time. That’s far from the ideal strikeout to walk ratio the Cardinals would like to see from Grichuk.

“I think we’re still seeing some strikeouts that we’re trying to work our way through, but just trying to help him find that nice balance of putting the ball in play and driving the ball,” says Matheny.

Nevertheless, the Cardinals have decided that now is the right time to bring Grichuk back. Matheny hasn’t given specifics on how he may be used upon his return. But the manager admitted on Friday that it doesn’t make sense for Grichuk to return to St. Louis and not playing regularly.

Grichuk is likely to see most of his playing time in right field. Stephen Piscotty, the team’s regular right fielder, has been limited to pinch-hitting lately because of forearm discomfort. It will also be difficult for the Cardinals to bench left fielder Tommy Pham, who’s been one of their best players since coming up in early May.

Aside from wanting added outfield depth with Piscotty fighting an injury, recalling Grichuk appears to be somewhat of a desperate move. The Cardinals are 8-15 during the month of June and quickly falling out of the playoff picture.

The Cardinals are running out of time to make positive strides before deciding whether to be buyers or sellers at the trade deadline. The club wants to see if Grichuk can make a difference before they have to make that decision. It’s also possible that Grichuk could be seen as a trade chip. Thus, the Cardinals needed to get him back to the big leagues to see what he can do.

Whether Grichuk is ready to return to the majors and make a positive impact is anybody’s guess. There’s no denying he has loads of talent. But his numbers at triple-A don’t necessarily indicate his issues have been solved. Regardless, the Cardinals need to do something to find a spark in order to save their season, and promoting Grichuk is a move that’s worth a shot.