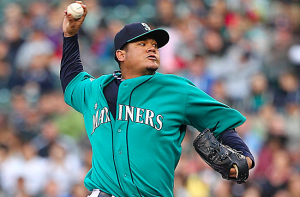 The 2017 season has not gone according to plan for the Seattle Mariners. But the season is not over yet, and now the surging Mariners are poised to welcome back their ace. Seattle, winners of five in a row, will activate Felix Hernandez on Friday. Hernandez will make his first start in nearly two months as the Mariners begin a series against the Houston Astros.

Hernandez went on the DL in late April with shoulder bursitis. Before the injury, he had been up and down during his first five starts of the season. But after three rehab starts, King Felix says he’s healthy and ready to resume his season.

“I feel much better,” Hernandez said on Thursday. “No pain, so I’ll be back way better than I was.”

The Mariners are also excited to have Hernandez back following an extended absence for a pitcher who has rarely been on the DL during his big league career.

“I’m really looking forward to it — he’s looking forward to it,” Mariners manager Scott Servais said of Hernandez’s return. “The extra rehab start we gave him was absolutely in my mind the right thing to do, to make sure he’s completely (ready). … He should be able to go out there and compete, and we’ll let him go as long as he can go and, again, keep us in the game and give us a chance.”

The Mariners have endured a stretch of time in which their four best starting pitchers were all on the DL. Hernandez being activated on Friday will mean that at least two of those starters are back from injury. James Paxton was the first to return at the end of May. But he’s struggled in his last four starts after being dominant early in the season.

Seattle continues to wait on Hisashi Iwakuma and Drew Smyly. Iwakuma had a rough rehab outing earlier this week, lasting just two innings. As a result, the Mariners will give him one more start in the minors before they activate him. Smyly has made progress in his return from an elbow injury. But he’s still at least a month away from pitching in the majors.

Despite all the injuries that have worked against them this season, the Mariners are very much in contention. Seattle has won its last five games to climb a game above .500. Competing for a division title is all but ruled out, as the Astros hold a 12.5-game edge over the Mariners. But the Mariners have crawled to within one game of the second wild-card spot.

“Somehow, we’ve managed to stay afloat through all the injuries, and hoping we get to the point where we’re at around the .500 mark when you start getting everyone healthy,” says Servais. “I think we’ve accomplished a lot to that point, to still be afloat. (But) there’s a lot of work to be done.”

Most teams would have been buried by the injuries the Mariners have endured this season. But they still have everything to play for this year. There’s also hope that they will continue to get healthy in the weeks to come. The return of Hernandez on Friday could provide a huge lift to a team that’s endured some tough times but is finally moving in the right direction.

“Felix pitches with a lot of emotion, and the adrenaline will be up (Friday night),” said Servais. “He’s anxious to get back out there and help the team.”