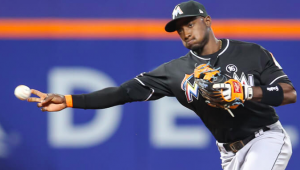 The first trade of the summer trade season has been completed. In a deal completed Monday afternoon, the Tampa Bay Rays have acquired shortstop Adeiny Hechavarria from the Miami Marlins. The Marlins receive two prospects, outfielder Braxton Lee and pitcher Ethan Clark, as part of the trade.

At the moment, Hechavarria is on the DL. He went down with an oblique strain the second week in May. However, he’s been playing in minor league rehab games for over a week and should be ready to return soon. When he’s activated, Hechavarria figures to become Tampa’s primary shortstop.

The Rays entered the season expecting Matt Duffy to be their primary shortstop. However, he remains sidelined after undergoing heel surgery last September. With no timeline for when Duffy may return, the Rays decided to make a move for Hechavarria.

Tim Beckham has become Tampa’s primary shortstop. He’s been solid, but the acquisition of Hechavarria allows the Rays to move Beckham to second base. Second baseman Brad Miller has struggled amidst multiple injuries this season. He’s currently on the DL with a groin strain. Rookie Daniel Robertson is currently filling in at second base. He’s struggled to produce consistently despite providing five home runs in the first 58 games of his big league career.

The move to acquire Hechavarria is as much about the Rays solving the problem at second base as it is finding a new shortstop. Hechavarria is one of the most sure-handed shortstops in baseball, which should help the Rays, who often live and die with the performance of their pitching staff.

When he’s not been injured this year, Hechavarria has had a nice offensive season, although he’s never really taken off offensively in Miami. He and Beckham should give the Rays a middle infield tandem that’s more consistent on both sides of the ball.

For the Marlins, the trade is the first of what could be several deals Miami makes this trade season. Miami is reportedly open to unloading several players this winter in an effort to save money. The Rays are expected to cover Hechavarria’s remaining salary this season. The Cuban shortstop is making $4.35 million this year. He has one year of arbitration left before becoming a free agent following the 2018 season.

The Marlis also acquire a couple of intriguing prospects, in addition to freeing themselves of Hechavarria’s salary. Lee is putting up impressive offensive numbers at double-A, albeit in his second season at that level. Meanwhile, Clark is still in A-ball but having a good season. He also has a 6′ 5” frame and decent upside.

Ultimately, this trade should benefit both teams. The Marlins will save a little money, which appears to be their top priority this summer. Miami also adds to its farm system with a couple prospects. Meanwhile, the Rays settle their middle infield situation as they look to compete for a playoff spot the second half of the season. Adding Hechavarria may not make a huge splash, but it’s definitely an upgrade for the Rays, who find themselves in a crowded and competitive AL East.