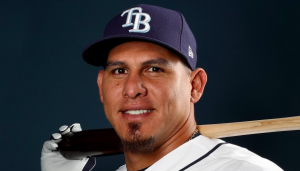 The Tampa Bay Rays have made a long-awaited shakeup behind the plate. The club announced Saturday that catcher Wilson Ramos has been activated from the DL. Ramos is in the starting lineup for Saturday’s game against the Orioles. In a corresponding move, the Rays have designated catcher Derek Norris for assignment.

The Rays signed Ramos to a two-year, $12.5 million deal over the winter. At the time, they knew he wouldn’t be ready for the start of the season. Ramos suffered a serious knee injury last September while with the Washington Nationals. He required surgery to repair the ACL, medial meniscus, and lateral meniscus in his right knee.

Despite the injury, Ramos is coming off a career year offensively in 2016. He hit .307 with career highs in home runs (22) and doubles (25), posting an OPS of .850. Before the injury, Ramos looked likely to hand a four- or five-year contract. But his prospects obviously changed after undergoing major knee surgery, allowing a small-market team like the Rays to afford him.

The fact that the Rays are immediately putting Ramos behind the plate and have cut ties with Norris indicates that club is confident in the health of his knee. He played in 13 minor league rehab games, hitting a modest .214. He started nine of those 13 games behind the plate.

There was some speculation that when he returned from the injury Ramos may be limited to DH duty initially. It’s still possible that Ramos could spend significant time at DH. With both Kevin Kiermaier and Colby Ramus on the DL, the Rays could look to give Corey Dickerson more time in the outfield, opening up the DH spot for Ramos. However, the Rays appear confident that Ramos is ready to handle things behind the plate.

Of course, it remains to be seen how much playing time Ramos will receive upon his return. Tampa Bay may prefer to ease him back into being the primary catcher. Jesus Sucre remains Tampa’s backup catcher. Sucre hasn’t produced much offensively this year, but he could see increased playing time while Ramos eases back into the lineup.

As for Norris, he will look to catch on with his third team this year. Ironically, the Nationals acquired in a trade early in the offseason as their replacement for Ramos. However, when Washington signed Matt Wieters late in the offseason, Norris became expendable. The Rays picked him up, knowing they would need a stop-gap until Ramos was ready to return. That day has finally arrived, once again making Norris expendable.

On the season, Norris is hitting just .201. He needed three hits in Friday’s game just to get above the Mendoza line on the season. However, he has contributed nine home runs and 24 RBIs in 53 games, so he does provide some power offensively. It’s likely that some team will view him as an upgrade for their catching situation, even if it’s in a backup role.

As for the Rays, they will be excited to finally have Ramos activated, even if they’re not sure what to expect from him right away. Even with Ramos being activated, the Rays still have 10 players on the DL. Nevertheless, they own the second wild-card spot and are just 2.5 games behind the Yankees and Red Sox atop the AL East. If Ramos can pick up where he left off last year offensively, he could provide a big lift for the Rays as they chase after a playoff spot the second half of the season.