Terry Collins Expresses Frustration After Mets Get Swept by Diamondbacks 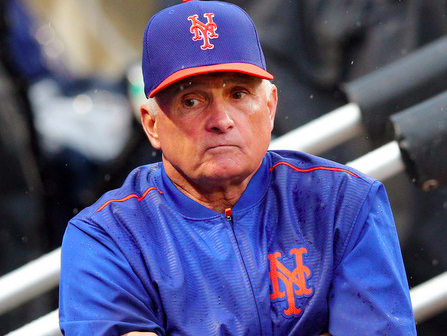 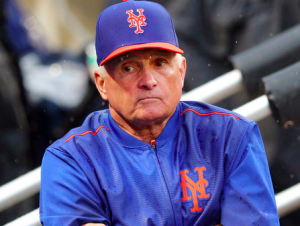 The New York Mets are in a downward spiral, and Thursday may have been the lowest point of their season, as the reigning National League champions lost 9-0 to the Arizona Diamondbacks, completing a three-game sweep at home against one of the worst teams in baseball. After the game, Mets manager Terry Collins held a closed-door meeting with his team, which was following by a players-only meeting. At his post-game press conference, Collins took the first question he received from a reporter and proceeded to go on a nearly four-minute rant in which he expressed his frustration over the state of the team.

The question Collins fielded at his press conference related to who is responsible for changing the negative feelings in the clubhouse amidst the team’s recent tailspin. “In the past, we have relied heavily on our veteran presence in the clubhouse,” Collins answered. “But, you know, this is a lot of responsibilities. I am the manager here. It starts with me, and as I just have said so many times, I don’t care who’s not here. There are no excuses here. These are Major League Baseball players.”

The Mets are noticeably missing leaders in the clubhouse this season, as the team’s biggest strength is a relatively young pitching staff. Meanwhile, captain David Wright has been on the DL for most of the season, while several notable veterans are in their first season with the team, including Neil Walker, Asdrubal Cabrera, and Jay Bruce, who is less than two weeks into his tenure in New York.

But veterans or not, Collins appears upset at the effort his team is putting forth right now. “I know one thing, there’s got to be a passion to come and play. There’s got to be a sense of, ‘This is what I do for a living. The people that pay to see me play are going to see my best effort,'” Collins exclaimed.

To be fair, the Mets have endured a whole lot of injuries this season. In addition to Wright, the Mets have played much of the season without first baseman Lucas Duda and ace Matt Harvey. New York also experienced a period earlier this month in which they lost five players to the DL within a period of one week, including Cabrera, all-star Yoenis Cespedes, Wright’s fill-in Jose Reyes, and Gold Glover Juan Lagares.

However, Collins is not using those injuries as an excuse. “I don’t care who is not here. There are no excuses here. These are major league baseball players,” he said. “I don’t care where they come from. I don’t care how they got here. The names on their back and on the front of their uniforms say they’re a major league baseball player. It starts with them. When you come (here), you have a responsibility to the fans, the organization and the respect for this game to come out and grind it out.”

Finally, the Mets manager promised that things would start to turn around soon. “Starting tomorrow, we’re back fresh,” Collins stated. “Starting tomorrow, we’re going to get after it here, and those who don’t want to get after it, I will find somebody else who does, because in Las Vegas (the Mets triple-A affiliate), there’s a whole clubhouse filled with guys that want to sit in this room, and I’ll find them. That’s all I’ve got to say. I’m done.” Collins then walked out of the press room without fielding another question.

Thursday’s loss gives the Mets a .500 record on the season and drops them three games behind the Miami Marlins for the second wild card spot. The team is officially in the danger zone if they want to return to the postseason this year.

The silver lining is that the Mets begin a series Friday against the San Diego Padres, who have traded away most of their top players, giving New York a chance to get back on track against a weaker opponent, at least in theory. After that, the Mets get a shot at redemption with a three-game series against the same Diamondbacks team that just swept them at home. If the Mets can’t get it going during their next six games, there may be nothing left for Collins to do or say to save the team. After Thursday, he’s just about run out of things to say.