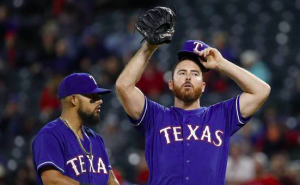 The Texas Rangers are preparing to cut ties with relief pitcher Sam Dyson. Ken Rosenthal, among others, are reporting that the Rangers will designate Dyson for assignment on Friday when Jose Leclerc is expected to be activated from the DL. Dyson began the season as the team’s closer but has had a swift fall from grace, producing a 10.80 ERA in 17 appearances. The Rangers are apparently tired of waiting for him to get it together.

Dyson’s fall from prominence has been puzzling, to say the least. He came to the Rangers at the trade deadline in 2015 and immediately became a key part of the team’s bullpen on its way to a division title. He then moved into the closer’s role last season, saving 38 games in 43 opportunities with a 2.43 ERA, once again helping the Rangers win a division title. But somehow everything has fallen apart for him this season.

Dyson’s struggles have been even more puzzling after his dominance while pitching for Team USA in the World Baseball Classic in March. He worked six innings without allowing a baserunner while helping the Americans win the tournament. But as soon as the regular season started, he was a disaster. Dyson and the Texas bullpen imploded twice during the first week of the season, and things haven’t gotten much better since then.

By the middle of April, Dyson was 0-3 with three blown saves and an ERA of 27.00. The Rangers placed him on the DL with a hand contusion and when he returned from the injury he had been removed from the closer’s role. However, pitching without the pressure of the closer’s role was not a remedy. Dyson was 1-3 with a 5.79 ERA in nine appearances during the month of May. On Wednesday, he allowed three runs, including two home runs, against the Rays in an inning of work. That appearance may have been the final straw for the Rangers.

The Texas bullpen currently has the second-highest ERA in the American League, and Dyson is far from the only culprit in that group’s struggles. Jeremy Jeffress and Tony Barnette have also been huge disappointments after being counted on heading into the season to fill prominent roles in the bullpen. Yet, Dyson appears to be the scapegoat for the entire bullpen.

After winning 10 straight games in the middle of May to get themselves above .500, the Rangers have hit another rough patch. Texas has lost eight of its last 11 games. But like most teams, they are far from out of it with regard to contending for a wild-card spot. However, the bullpen remains a huge issue for them, and cutting ties with Dyson is unlikely to solve all of their problems.

As for Dyson, the Rangers may be able to work out a trade for him once they designate him for assignment. Despite his struggles this season, Dyson does possess some upside if he can find a way to get his sinker down and return to his days of being a ground ball pitcher. A team that believes it’s in contention but having bullpen issues may want to take a flyer on him. The Twins, Tigers, Cardinals, Mets, and Nationals are all teams that fit that description.

Obviously, this season has not gone according to plan for Dyson, and the Rangers can hardly be blamed for wanting to part ways and shake up their struggling bullpen. But there’s little doubt that Dyson will get another chance to pitch in the big leagues and could very easily be with a new team within the next week.