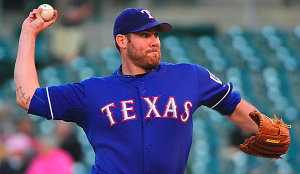 In a matter of hours on Wednesday, the Texas Rangers lost two pitchers from their starting rotation, the starting rotation that has been among the best in baseball all season and a huge factor in the Rangers building a 10-game lead atop the AL West. Derek Holland was placed on the DL Wednesday, while Colby Lewis will soon join him, and both will be on the shelf alongside Yu Darvish.

Lewis has been on of the team’s best pitchers this year, pitching like a potential all-star at the age of 36. However, in his most recent start on Tuesday, Lewis complained of cramping in his arm, while allowing six earned runs in five innings against the Cincinnati Reds. An MRI taken Wednesday revealed a lat strain. The plan is for Lewis to rest for four weeks and then get another MRI to see if the injury has healed well enough for him to resume throwing.

The Rangers haven’t yet placed Lewis on the DL, but they will prior to Friday’s series opener against the Boston Red Sox following an off day on Thursday. Even if Lewis is able to resume throwing in four weeks, it’s unlikely that he’ll be able to return until August, so he will miss a significant amount of time.

Holland has not been quite as good as Lewis this season, but he’s taken the ball every five days for the Rangers, at least until now. The lefty has been placed on the 15-day DL with shoulder inflammation after failing to pitch at least five innings in each of his last two starts. “It’s been going on for a little bit and started bothering me a little bit more in the last start so we want to make sure everything is OK,” Holland said Wednesday. “I felt like I could play through it, but obviously I wasn’t doing a good job.”

There’s no timetable for Holland’s return, but his comments make it seem like he could be able to return when he’s eligible to come off the DL in a couple weeks. Meanwhile, Darvish may throw a bullpen session this weekend after throwing on flat ground earlier this week, as he returns from neck and shoulder discomfort he experienced in his third start of the season since returning from Tommy John surgery. Darvish is eligible to come off the DL soon, but it could be another week or more until he’s ready to pitch in a game.

The good news for the Rangers is that righty A.J. Griffin is set to return from the DL and will start against the Red Sox on Saturday. Griffin made six starts this season before heading to the DL with shoulder stiffness. In those six starts, he was 3-0 with a 2.94 ERA. If he can return to that form, he’ll be a more than suitable replacement for Lewis. Texas is likely to fill the other spot in the rotation with either Chi Chi Gonzalez, who has 10 career big league starts but a 5.04 ERA at triple-A this season, or veteran Kyle Lohse, who signed with the Rangers on a minor league last month.

The return of Griffin is certainly a positive development for the Rangers, but the loss of Lewis and Holland on the same day, and the uncertainty surrounding Darvish will undoubtedly test the depth in what has been an excellent starting rotation. Cole Hamels remains the ace, while Martin Perez has become a reliable contributor, but beyond that there is some level of uncertainty until the likes of Lewis, Holland, and Darvish can work their way back. The good news is the Rangers still hold that 10 game lead in the division, which should help them survive this flurry of injuries to their starting rotation.