Tigers Put Zimmermann on DL, Norris Could Be Next 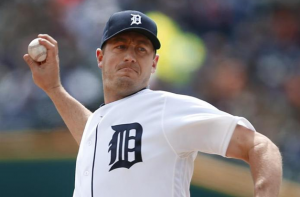 The Detroit Tigers placed Jordan Zimmermann on the 15-day DL Monday due to a lingering neck strain. Zimmermann was scheduled to pitch Tuesday against the Cleveland Indians, but instead that start will go to Anibal Sanchez, who spent much of June in the Detroit bullpen but now has a chance to return to the rotation. To make matters worse for the Tigers, Daniel Norris may soon be joining Zimmermann on the DL after he left Monday’s loss to the Indians in the third inning with an oblique injury.

Detroit manager Brad Ausmus says Zimmermann has been dealing with a strained neck for the past 10 days to two weeks, but has been pitching through it. After skipping his normal bullpen session following his start last on Thursday, Zimmermann attempted to throw off a mound Monday, but was unable to, prompting the Tigers put him on the DL. “It just wasn’t going away, and they had done some treatment. He hadn’t thrown after his last start, hoping it would go away or at least abate, and it just hasn’t. So we’re going to take this opportunity to hopefully get him right,” Ausmus explained.

Zimmermann was almost un-hittable during the early part of the season, but he started to run into trouble in May and then posted a 6.43 ERA in his six starts during the month of June. One has to wonder if the strained neck has been a contributor to his recent struggles. His DL stint is retroactive to July 1, so he’ll be eligible to return soon after the all-star break if his injury heals quickly. However, Zimmermann will miss at least two starts, as he was scheduled to pitch Tuesday against the Indians and then again Sunday against the Toronto Blue Jays.

As for Norris, he left Monday’s start after allowing two runs on three hits over the first two innings. The team described his injury as a right oblique strain and said Norris will undergo an MRI on Tuesday to determine the severity. He was making just his fourth appearance and third start of the season with the Tigers after he began the season on the DL with a spine issue and made 13 starts in the minors.

Norris missed a month last year with a similar injury, but he’s optimistic that won’t be the case this time. “It’s kind of close [in location],” he said after Mondays’ game, “but I don’t think it’s as severe as last year. It doesn’t feel quite the same.” The Tigers are holding out hope that Norris doesn’t have to go on the DL, but with the all-star break coming up, it may be a wise move to make. Of course, Norris would miss Saturday’s start against the Blue Jays and at least one more after the break if he were to go on the DL.

For now, Sanchez will rejoin Detroit’s rotation, at least until the all-star break, but possibly longer depending on how long Zimmermann remains sidelined and whether Norris goes to the DL or not. Sanchez began the season in the rotation, but posted a 6.71 ERA in 12 starts, prompting a move to the bullpen. In eight relief outings, Sanchez has a 2.84 ERA, but he will now be asked to make a start at a time when the Tigers need him to step up.

Detroit is currently 6.5 games behind the Indians in the AL Central and one game out of the second wild card spot. The Tigers have struggled to beat Cleveland all season and will need to pick up some head-to-head wins against the Indians if they hope to close the gap. Ausmus is trying to keep expectations realistic for Sanchez, but admits the team needs him. “I can’t expect him to go too deep, because his pitch count hasn’t been up that much the past month. But we need a good outing,” Ausmus said.