Posted on August 7, 2016 by Bryan Zarpentine 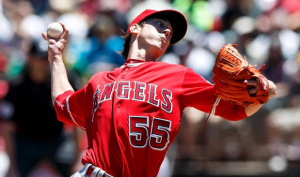 The major league comeback for two-time Cy Young winner Tim Lincecum has had a set back. The Los Angeles Angels announced Saturday that Lincecum has been designated for assignment. The decision comes on the heels of Lincecum allowing six runs over 3.1 innings in his start Friday night against the Seattle Mariners. Over his nine starts with the Angels since he made his return to the majors earlier this season, Lincecum is 2-9 with a 9.16 ERA.

Lincecum’s season debut with the Angels went well, as he allowed one run over six innings. However, it’s been all down hill since then. He’s failed to last at least five innings in five of his last eight starts. Even for a team that has struggled just to put pitchers on the mound due to a high volume of injuries, the Angels chose not to carry on with Lincecum struggling so much.

“Where Tim is now, and where he needs to be, there’s a gap there,” said Angels manager Mike Scioscia, who believes that Lincecum has regressed from his first couple of starts.

“It’s a matter of understanding his mechanics, getting his release point more consistent. That’s really impossible to work out at the Major League level,” Scioscia explained. “In order to get Tim to be that finished product of where we feel he can come up here and be a winning pitcher in the Major Leagues, it’s going to take some work. We hope he’ll go to Triple-A and work on it and see how it progresses.”

With nearly 10 years of major league service time, Lincecum has the right to refuse a minor league assignment with the Angels if he clears waivers, allowing him to become a free agent. However, Scioscia described Lincecum as “pragmatic” after he was given the news and is hopeful the former Giants ace will head back to the minors and put himself in a position to return to the Angels when rosters expand in September.

Lincecum said Friday before his demotion that he believes he’s moving in the right direction. “I don’t want to be patient,” he said Friday. “But obviously it’s something I’ve had to grasp because of the way things have gone and the way this has progressed and the way I’m going after it. I’m not going out there just throwing bullpens against nobody. I’m still trying to get outs in the [American League] West, against good hitters. It just goes back to throwing quality strikes. I’m not doing it on a consistent basis to help myself out enough.”

Some talent evaluators who have watched Lincecum this year believe he will need a healthy offseason to train in order to make himself a major league caliber pitcher, something he did not have last winter after undergoing surgery on his hip. Lincecum doesn’t figure to give up on returning to the majors and becoming a viable big league pitcher, even if his best days are behind him, but after his recent struggles and being designated for assignment, he has a long road ahead of him to get where he wants to be.