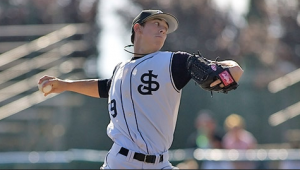 Two-time Cy Young winner Tim Lincecum made his 2016 debut Thursday night pitching for the Salt Lake Bees, the triple-A affiliate of the Los Angeles Angels. Last month, Lincecum signed one-year, $2.5 million contract with the Angels, whose pitching staff has been decimated by injuries all season. The start was Lincecum’s first in nearly a year; he last pitched June 27 for the San Francisco Giants before being shut down and ultimately undergoing hip surgery in September.

Lincecum got off to a slow start in what was his first appearance in a minor league game since 2007. He allowed two runs in the first inning and another run in the third inning, although Lincecum would settle down and go one to retire nine batters in a row at one point, facing a lineup that included Seattle Mariners shortstop Ketel Marte, who is on a minor league rehab assignment. Lincecum ended up pitching five innings, allowing three runs on three hits, walking three and striking out five. He also hit a batter and allowed a run to score via a balk. He left the game with Salt Lake trailing and ultimately took the loss.

“It’s good to get the feet wet again and get in that game-type atmosphere and just get the ball rolling again,” Lincecum said after the game. “It kind of got the better of me the first couple innings, and then I settled into it and started making better pitches and getting better results.”

Lincecum threw 88 pitches, with reports of his fastball sitting around 88 to 89 mph. That’s a significant dip in velocity from the prime of his career, but the 31-year old found a way to make it work. “About the third inning, it kind of came around. I forget who the hitter was, but I went fastball away, fastball in, and that kind of just established it, and I was like, OK, I can still do those pitches,” he explained.

Lincecum had pitched in a pair of extended spring training games since signing with the Angels, but this was his first appearance in a real game. “The approach is kind of like spring training. You want to do well, but you want to establish strikes and not worry necessarily about the result,” he said. “So, today I was kind of trying to do that, but at the same time, worry about the result because I don’t want to be getting hit around.”

The plan is for Lincecum to make one more start in triple-A before joining the Angels. He is schedule to pitch for Salt Lake again on Tuesday and then pitch for the Angels when they host the Cleveland Indians on June 12. Currently, Los Angeles pitchers Andrew Heaney, Garrett Richards, and C.J. Wilson are all on the 60-day DL. Needless to say, the Angels are looking for reinforcements and eager to get Lincecum in the big leagues. The former Cy Young winner is eager to get back to the majors too, and Thursday was an important step in the right direction for both parties.