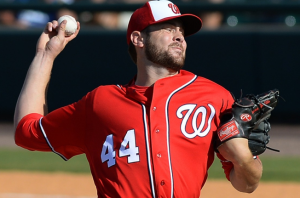 With Stephen Strasburg on the DL, the Washington Nationals have a void to fill in their starting rotation, at least for the time being. On Tuesday night, that void will be filled by Lucas Giolito, who will be making his big league debut. Giolito is considered by many to be the top pitching prospect in all of baseball, and arguably the top prospect overall. In his debut, he will face the division-rival New York Mets, who will be sending Matt Harvey to the mound.

The Nationals drafted Giolito with the 16th overall pick in the 2012 MLB Draft. At the time, he was considered the best prep pitcher available in the draft, but he fell to the 16th pick due to concerns about the health of his elbow. He would ultimately undergo Tommy John surgery, but since his return he has moved quickly through Washington’s minor league system, although he has been called up to the majors straight from double-A. In 14 starts at double-A this season, Giolito has a 3.17 ERA with 72 strikeouts in 71 innings of work.

The scouting report on Giolito could not be more impressive. He’s 6′ 6” with a fastball that sits in the mid-to-upper 90s and is graded as a plus-plus pitch. Giolito is also armed with a 12-6 curveball that most scouts grade as a plus pitch, as well as changeup that has continued to improve throughout his time in the minors and is now considered an above-average offering. The Nationals are also pleased with his level of maturity and professionalism for a young player.

Nationals GM Mike Rizzo says the team was considering promoting Giolito to triple-A when the opportunity to pitch in the majors presented itself with Strasburg going on the DL. Rizzo is trying to downplay the hype and expectations surrounding Giolito, but that’s obviously easier said than done.

“It’s not going to be another day at the office for him because there’s going to be a second deck on the stadium that he pitches in this time,” Rizzo said Monday when the team announced that Giolito would be starting on Tuesday. “But he’s a confident kid that I think will handle the pressure of his Major League debut against a really good team like the New York Mets in stride and give us a chance to win the baseball game.”

Washington manager Dusty Baker did a little better job of trying to manage expectations before Giolito’s debut on Tuesday. “You don’t know if he’s ready or not until they actually get here and perform,” Baker explained. “And then you still don’t know if they’re ready because it takes a while for the league to learn you and you to learn the league, but I liked what we saw in spring training.”

Whether Giolito will stay with the Nationals beyond Tuesday’s start remains to be seen. Rizzo said the team will handle Giolito “start by start.” If Giolito stays in the majors or returns to the minors will likely depend on how he performs Tuesday and how soon the Nationals think Strasburg will be able to return to the rotation, among other factors. Either way, the much-hyped Giolito will get his first chance to prove himself in the big leagues Tuesday night against the Mets.