Trent Richardson Sees Himself Making The Hall Of Fame

Had Baltimore Ravens running back Trent Richardson said after he was drafted by the Cleveland Browns with the No. 3 pick in 2012 that he envisioned his career ending with him making the Hall of Fame most people would have thought it was possible. He had a great career at Alabama and was going to get the chance to produce with the lowly Browns.

But he didn’t make any such comment back then—and that’s a good thing. Can you imagine the ridicule he would have been forced to endure at the hands of the media and internet trolls over the last few years? 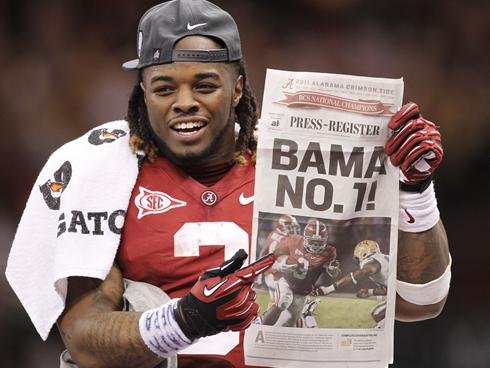 With how he played, he would have deserved every bit of it. So why aren’t people giving him a hard time since he is talking Hall of Fame now?

Yes, he is talking Hall of Fame. In a recent interview, he was asked where he sees his career ending and answered with this:

“Putting on a yellow jacket,” Richardson said, referring to making the Pro Football Hall of Fame. “People wrote him off, he came back and did some amazing things. He always had the pedigree. He just had to get back to the guy that we know.”

Richardson was supposed to be the next great running back; some even thought he could be better than Adrian Peterson. Instead, his name has been added to the list of potential all-time draft busts. As a rookie on a bad Browns team, he managed to gain almost 1300 total yards from scrimmage and scored 12 touchdowns. Not great, but it wasn’t bad either.

Had he been able to build off of that he might have become something, but the Browns took advantage of the Indianapolis Colts and got rid of him. With the Colts—well, the best way to describe his play is to say he stunk.

How else do you describe a guy that averaged 2.9 yards a carry in 14 games, but only eight starts and was benched for being ineffective and missing the team plane?

For some odd reason, the Raiders signed him to a two-year deal and even guaranteed him $600,000 a few days after the Colts cut him. He ended up being cut before the 2015 season began.

He didn’t play for anyone last year but signed with the Baltimore Ravens during the offseason.

It’s not hard to see why the Ravens are willing to give him a chance. He was a great college player, and now that he has his head on straight and his priorities right (or so he claims), maybe he can finally live up to his potential.

But that can be said about a lot of guys. So what makes him worth giving a chance?

It’s good that he is feeling confident, but he may want to temper his expectations before he talks about making the Hall of Fame.  He may want to make the team first. With the group of running backs the Ravens have, that is going to be easier said than done.

Especially for a guy with the second lowest career yards per carry average in the history of the NFL (3.3 yards; minimum 500 carries).