Utley Gets Hero’s Welcome in Philly, Leads Dodgers in Blowout 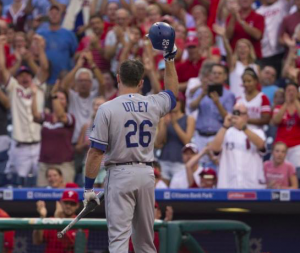 For the first time since he was traded to the Los Angeles Dodgers exactly one year ago this Friday, Chase Utley returned to Philadelphia Wednesday night, playing against the Phillies at Citizen’s Bank Park. Upon his return, the Philadelphia fans treated Utley to a most friendly of homecomings, and Utley returned the favor by treating the fans to an offensive explosion, helping the Dodgers beat the Phillies 15-5 and take over sole possession of first place in the NL West.

Fans gave Utley a standing ovation that lasted nearly 90 seconds prior to his first at bat. “It’s completely overwhelming,” Utley said afterwards. “The standing ovation my first at-bat is something I’ll never forget. It was truly special.” He admitted to being a little emotional in his return to Philly. “I held it together fairly well,” he said. “It is a situation I’ve never been in before. It’s something you can’t describe in words. It is a special feeling to see the fans give you their support.”

But Utley’s first at bat was just the start of the love fest between him and the fans. In the 5th inning, Utley hit a solo homer, prompting fans to ask for a curtain call, which the second baseman gladly obliged. Two innings later, Utley hit a grand slam to bury the Phillies and help secure the win for the Dodgers. Despite what the home run did to the hometown team, fans once again requested a curtain call from Utley, who once again emerged from the dugout to a raucous applause.

During Utley’s first standing ovation, he not only acknowledged the crowd, but long time teammate Ryan Howard as well. Howard was also glad to see Utley back in Philadelphia and watch the crowd give him such a positive response. “I think it just goes to show you can change the uniform, but he’s always going to be a Phillie at heart,” Howard said. “He’s always going to be a Phillie to everybody here. I thought it was great. I thought it was awesome. For the fans to give him a curtain call again, it shows what he was able to do here and the impact that he had here on the fans.”

Prior to the game, Utley had a chance to reflect on his time in Philadelphia. “We had a lot of great times here at this stadium,” he said. “I spent so much time here, so many great memories. I can’t really say enough about the support I received. Obviously, we had some great players and great coaches, but the fans kind of took us to the next level.”

Utley also acknowledged that returning to Philadelphia was important to him because of how abruptly he left when he was traded last August. “I didn’t really have an opportunity to say goodbye,” said Utley, who did not play in his last game with the Phillies while his trade was being finalized. “Everything kind of happened pretty quickly last year. If I were to write up a script it would have gone a bit differently.”