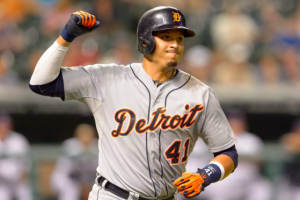 Detroit Tigers DH Victor Martinez has been sent to the 10-day DL and the hospital because of an irregular heartbeat. Martinez was hospitalized after leaving Thursday’s game against the Rays amidst complaints of dizziness, sweats, and an accelerated heartbeat. He spent Thursday night in the hospital and may remain in the hospital through Saturday while doctors investigate the cause of his symptoms.

“I talked to him,” said Tigers manager Brad Ausmus. “It’s scary. It’s not something at his age (38) you would generally consider an issue or something to worry about. But that said, he was making it through. There is a little bit of an unknown factor to it, which causes more anxiety than anything else.”

Martinez first mentioned his symptoms to the team trainer following his second at-bat on Thursday. He was ultimately removed from the game for a pinch-runner in the 7th inning. But even after escaping a hot night for the air-conditioned clubhouse, his symptoms persisted. Martinez was barely audible when speaking with reporters after the game.

“Just hope he’s all right; hope everything goes well,” said teammate J.D. Martinez. “Definitely a scary situation. You hate to hear stuff like that. I found out after the game and I was like, that’s kind of crazy.”

The team originally thought Victor Martinez was suffering from a virus or simple dehydration. However, when his symptoms didn’t subside long after he exited the game, the decision was made to bring Martinez to the hospital for further examination and treatment. The Tigers are hopeful that by Saturday things will have cleared up and they’ll have more information.

“We will know more tomorrow,” Ausmus said. “My feeling is it’s never happened to him before, but I don’t know that for a fact. I didn’t find out about it until he had to come out of the game. My first thought was dehydration. I am not sure the doctors know yet what caused it. Oftentimes the body corrects itself on its own.”

Considering the uncertainty of the situation, the Tigers decided to put Martinez on the DL. Catcher John Hicks has been called up to take the empty spot on the roster. Hicks hit .306 with three home runs in 49 at-bats across multiple stints with the Tigers this season.

With Martinez on the DL for at least 10 days, Ausmus has to find a new way to utilize the DH spot until Martinez is ready to return. The manager’s first instinct was to use Miguel Cabrera in that role. Cabrera disclosed after Thursday’s game that he’s been battling several nagging injuries throughout the season. However, when Ausmus broached the subject with him, Cabrera resisted being taken out of the field.

Alex Avila is another option to see time at DH. Avila is hitting .310 with an OPS of 1.027, although he has split time behind the plate this season with James McCann. J.D. Martinez, who missed the early part of the season with a foot injury, could also benefit from a little time at DH. Of course, regardless of who ends up filling in, the loss of Martinez to the DL deprives the Tigers of one of their most important offensive players.

“Vic is a big bat for us,” said J.D. Martinez. “He’s our four-hole hitter, a switch-hitter who provides protection for Miggy. Definitely, there is a big piece that we are missing.”

The Tigers are currently under .500 and hoping to prove over the next month that they have a legitimate chance of competing for a playoff spot. Losing Victor Martinez, even for 10 days, will make it that much more difficult for Detroit to remain in contention. Of course, after being hospitalized with an irregular heartbeat, the long-term health of Martinez is a much bigger concern.