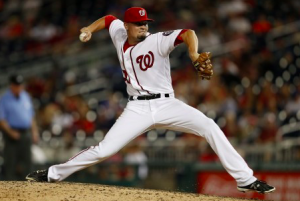 The Nationals named Blake Treinen the closer coming out of spring training after he was one of their most important setup men last season. However, Treinen had immense struggles out of the gate and was removed from the post before the end of April. He still has an ERA of 7.78, as he continues to struggle to find his footing in 2017.

Since Treinen was removed, the closer’s job has been a mixed bag with both Glover and Shawn Kelley getting most of the opportunities to close out games. However, Kelley has also struggled, as have many of Washington’s other relievers, including Joe Blanton, Oliver Perez, and Enny Romero. As a result, the Nationals currently have the worst bullpen ERA in baseball despite holding a comfortable lead atop the NL East.

Fortunately for the Nationals, Glover has been at the top of the game since returning from a hip injury less than two weeks ago. In five appearances since returning from the DL, Glover has tossed 5.1 scoreless innings. Given the struggles of the rest of the bullpen, Baker is finally comfortable giving the closer’s job to a pitcher who is less than two years removed from being drafted by the Nationals.

“Koda was kind of lobbying for that in the first place,” Baker said Wednesday. “We wanted to break him in slowly because this guy’s … Shoot, he’s only a year and a half out of college. So he had said that’s the job he wanted, and so it’s his now.”

Prior to naming him the closer, Baker made an effort to put Glover in situations typically reserved for closers, and Glover has been able to rise to the occasion each time.

“He’s very calm,” Baker said. “He throws strikes, quality strikes, and he has a pretty good idea of what he’s doing for a young pitcher.”

Despite Glover sharing the bullpen with several more established pitchers, his teammates appear to be on board with the youngster being the closer.

“His stuff is obviously off the charts and he’s got four pitches,” Nationals starter Stephen Strasburg said of Glover. “Might get a little cute and might turn him into a starter. But I like him there in the back end. He definitely seems to really enjoy the moment.”

Of course, giving Glover the closer’s job doesn’t mean the Nationals won’t be looking to find a more experienced option at the back of their bullpen later this summer. As recently as a week ago, there were reports that the Nationals were already calling teams to inquire about closers who may be available on the trade market. Among the names who could potentially be available in a trade are David Robertson, who was linked to Washington during the winter, A.J. Ramos, Kelvin Herrera, and even Mark Melancon, who the Nationals traded for last summer.

But if you ask Glover, the Nationals may not need to acquire any outside help this summer. Washington’s bullpen has gone three straight games without conceding a run, which is a big step in the right direction, especially since the closer’s job is no longer a revolving door. Glover is not only confident in himself as a closer, but he’s confident the entire Washington bullpen can get everything turned around.

“I think everybody is (building momentum),” the young closer said over the weekend. “Everybody’s getting uptight and stuff about the bullpen and everything like that. We’re fine. It’s early. We’ll be fine. We’re going to get rolling.”