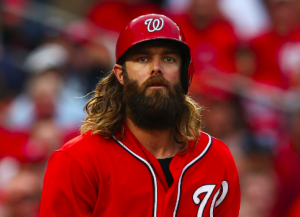 The Washington Nationals will continue their west coast road trip Monday in Los Angeles without the services of left fielder Jayson Werth. The Nationals will place Werth on the 10-day DL prior to Monday’s game against the Dodgers. Werth fouled a ball off his foot in the 9th inning of Sunday’s win over Oakland. Werth finished the at-bat and reached base. However, he had trouble running the bases after reaching on an error. Thus, the Nationals have decided to take the cautious approach and put him on the DL.

The Nationals appear unconcerned about the severity of Werth’s injury. X-rays of Werth’s foot that were taken after the game were negative, and so the team doesn’t anticipate a long absence. However, initial reports indicate that the 38-year old won’t be ready to play for at least four or five days. Washington has little interest in playing short-handed during that time, and so they decided to place Werth on the DL.

Veteran Ryan Raburn has been summoned from triple-A to fill the roster spot. The Nationals acquired Rayburn in a minor trade with the Chicago White Sox last month.

Werth was fortunate to survive a tweak of his groin last month without missing much time. However, he was not as lucky this time around. The injury interrupts what has been a rather resurgent season for Werth, who is in the final year of his contract with the Nationals. After posting fairly disappointing numbers the past two seasons, it looked like Werth was getting ready to call it a career. However, he has performed well this season, hitting .262 with an OPS of .814, once again becoming a productive member of Washington’s lineup.

It’s unlikely that Werth will lose his spot in the lineup due to injury, especially if he only misses the minimum of 10 days on the DL. Nevertheless, the Nationals will have to find a way to replace him for the time being. Werth has spent much of the season in the no. 2 spot in the order. Nationals manager Dusty Baker may look to third baseman Anthony Rendon to hit out of that spot while Werth it out.

In left field, the Nationals may have to mix and match. The Nationals have already loss center fielder Adam Eaton for the season with a serious knee injury. He’s been replaced with Michael Taylor, who would otherwise be a candidate to take over in left field. Back up corner outfielder Chris Heisey is also on the DL, leaving the Nationals lacking in outfield options, which is why they made the trade for Raburn.

With Werth out, the Nationals may look to get Adam Lind time in left field. Lind began his career as an outfielder and is having an exceptional season in a part-time role. Despite appearing in just 33 games, he’s hitting .338 with an OPS of 1.029. Brian Goodwin is also an option, although he’s played sparingly since getting called up last month. Rayburn could also see time, as he is not short on big league experience despite spending all season to this point in the minors.

Ultimately, Washington’s season shouldn’t be interruped much by Werth’s injury. The Nationals began Monday with a 10.5 game lead atop the NL West. However, they may be challenged to find a replacement for Werth while he’s out. It’ll also be good preparation just in case they lose the aging veteran to injury later in the season.