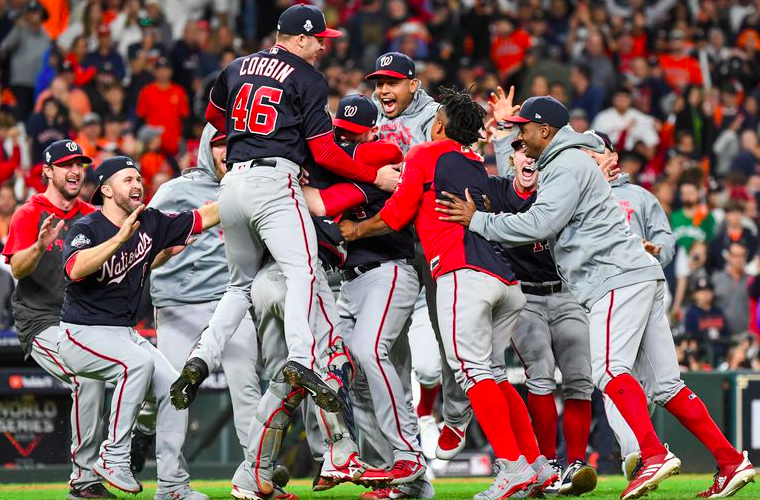 Having never won a playoff series since their move to the nation’s capital in 2005, the Washington Nationals have come a long way in a short period of time. They were counted out as early as May, faced an uphill battle throughout the postseason, and have ended up on top. After trailing 2-0 after six innings in Wednesday’s Game 7, the Nationals came back one more time, beating the Houston Astros 6-2 to win the 2019 World Series, the first championship in franchise history.

“What a story,” said Ryan Zimmerman, who’s been with the Nationals since their first season in Washington in 2005. “The way this game went is the way our whole season went.”

It’s truly been a wild ride for the Nationals from start to finish this season. They began the year with critics wondering how they would hope with the loss of former star Bryce Harper. They were counted out in late May when they were 19-31. Some questioned whether they could hold onto a Wild Card spot with such a leaky bullpen. In the end, the Nationals won 93 games and ultimately earned the top Wild Card spot in the National League.

Even after reaching the playoffs, it wasn’t over. The Nationals fell in an early 3-0 hole against the Brewers in the Wild Card Game, only to come back and win 4-3. They faced a 2-1 series deficit in the NLDS against the favored Dodgers but came back to win the series. After taking a 2-0 lead on the Astros, Washington lost all three World Series games at home, only to win Games 6 and 7 on the road, becoming the first team to ever win the World Series by winning four games on the road.

“Everything that we’ve been through over this past month, you can’t describe a better team than what we have,” said ace Max Scherzer, who started Game 7. “The moments that we all shared. It wasn’t just one guy, it wasn’t just one moment, everybody had a moment. Everybody stepped up.”

While it was a true team effort, it was Washington’s vaunted rotation that led the way. Stephen Strasburg, the former prodigy who the Nationals drafted first overall in 2009, was brilliant throughout the postseason. In five starts and one relief outing, Strasburg was 5-0 with a 1.98 ERA. He was the winning pitcher in Games 2 and 6 of the World Series on his way to being named World Series MVP.

Not to be forgotten is Patrick Corbin, the team’s key offseason acquisition they signed with the money they didn’t spend on re-signing Harper. Despite some rough moments as he morphed into a dual role as both a starter and reliever in the playoffs, he was huge when the Nats needed him the most. After losing Game 4 as a starter, Corbin was dominant in three shutout innings in Game 7 out of the bullpen.

Then there’s Scherzer. After battling back problems late in the season, he was able to start five postseason games, going 3-0 with a 2.40 ERA. Scherzer looked finished after being a late scratch in Game 5 because of neck spasms. But a few days later, with a little help from a cortisone shot, Scherzer was able to start Game 7 and give the Nationals a chance, allowing just two runs over five innings, setting up Washington for the comeback win.

In the end, the 2019 Nationals put together one of the best comeback stories in recent baseball memory. They were counted out early and often throughout the season, only to survive four elimination games during the postseason, knocking out the NL-favorite Dodgers and AL-favorite Astros along the way. For a team that had won four division titles this decade but lost in the NLDS every time, it was a long time coming but well worth the wait. To win a championship after overcoming so many obstacles makes it even sweeter.

“It’s not a mystery that we just kept fighting to the end and now look at us, we’re raising the trophy and we’re world champs,” said catcher Kurt Suzuki. “It feels like we had to come back in every game that we won, especially the elimination games. It just says a lot about this team and the character.”