Yankees Front Office Split on Being Buyers or Sellers 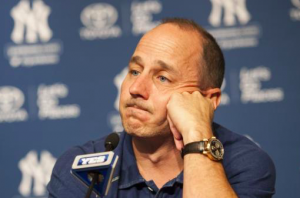 With a little more than two weeks until the non-waiver trade deadline, teams all across baseball are gearing up for one of the busiest times of year for front office people. Most teams seem to know where they stand, except that is, for the New York Yankees, who appear split on whether the team should be buyers or sellers as the deadline approaches.

A source within the organization speaking with anonymity says the organization is divided between those who think the team can still compete for a postseason spot this season and those who want to sell off key pieces at the deadline and start looking towards the future. The Yankees went into the all-star break with a 44-44 record, 7.5 games out of first place in the AL East and 5.5 games out of a wild card spot. However, they are fourth in their division, with the Orioles, Red Sox, and Blue Jays all sitting ahead of them, and all showing no obvious signs of faltering in the second half.

GM Brian Cashman and others who run baseball operations for the club reportedly want to sell, while owner Hal Steinbrenner and team president Randy Levine believe the Yankees can make a second half run and get into the playoffs. “There’s only two people in the tri-state area who think this team is still a contender,” the source said. “Hal Steinbrenner and Randy Levine.”

Last month, Cashman commented on the team’s situation following a five-game win streak that brought them up to .500. “We’re not going to be a seller unless ownership green-lights that,” Cashman said. “I’ll have an honest dialogue with ownership every step of the way as I always do. If we feel at a date in the future that that’s a necessity, then trust me, I’ll recommend it, and they’ll make a decision based on their comfort level. I’m always a brutally honest person.” Of course, weeks later, the Yankees remain a .500 team.

Meanwhile, Levine appears to be in denial about time running out to make a decision between buying and selling. “All the talk of buying or selling is speculation at this point,” he said. “There’s two weeks to go, and at that time we’ll make a decision. You can’t make any decisions until you have specific transactions in front of you.” With the August 1 deadline slowly but surely creeping up, the Yankees will soon need to pick a lane and stay in it.

In the event the Yankees become sellers, they’ll have plenty of players who could potentially be on the move. Carlos Beltran is an obvious candidate, as he’s having one of his best seasons in several years and will be a free agent after the season. Aroldis Chapman, Mark Teixeira, and Ivan Nova are also among the team’s notable free agents to be, although there could be a limited market for the aging Teixeira, who has struggled to stay healthy this year, as well as Nova, who owns a 5.18 ERA.

The Yankees would reportedly also be looking to shop Jacoby Ellsbury and Brian McCann in the hopes of freeing themselves of each player’s contract. Elllsbury will make over $21 million each year through 2020 with a $5 million buyout for 2021. Meanwhile, McCann will make $17 million each of the next two years with a $15 million option for 2019. Reports also indicate the Yankees would listen to offers for Andrew Miller, who made this year’s All-Star Team and has two years left on his contract after this year at $9 million per season.

With such inconsistent play over the first half of the season and three quality teams ahead of them in the AL East standings, it should be clear that the Yankees are better off as sellers than as buyers; making the playoffs this year is a long shot at best. The Yankees have plenty of valuable pieces to sell, and if they commit to being sellers at the deadline and do things right, they have a chance to acquire some useful assets for the future and put themselves in good position to compete in the years to come. They simply have to make the decision to become sellers and stick with it.