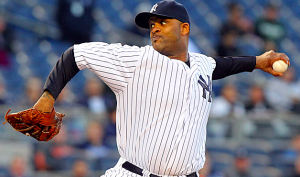 The New York Yankees appear poised to lose an important part of their starting rotation for the time being. Veteran lefty C.C. Sabathia left Tuesday’s start against the Angels after just four innings with a hamstring injury. Sabathia will undergo an MRI on Wednesday to determine the severity of the injury. But Yankees manager Joe Girardi said after the game that a trip to the DL is likely for Sabathia.

“It is a little sore,” said Sabathia. “I felt it grab. I thought maybe it was a cramp but when I went to push off it hurt and didn’t feel good.”

The lefty is hopeful that he can avoid a DL stint. But Girardi didn’t appear quite as optimistic following Tuesday’s game.

“It’s an issue,” Girardi said. “Obviously he’s going to have to have an MRI and we’ll get a timetable for it. But I anticipate it’s a DL.”

The initial thought from the Yankees is that Sabathia will be sidelined for two to three weeks. Of course, the results of the MRI will give the team a better indication. Also, Sabathia is a little more than a month away from turning 37, so he may not heal quite as quickly as he would have in his younger days.

Sabathia got off to a rough start this season. But he’s been excellent over his last six starts. He’s allowed just four earned runs over 36.1 innings over the span, getting the win in five of those starts. On the season, Sabathia is 7-2 with a 3.46 ERA, making him a key part of the Yankees success this season.

A big part of the team’s success this season is not only due to the performance of New York’s rotation but also the health of the rotation. The Yankees have needed just one start this year from a pitcher who wasn’t part of the starting rotation at the start of the season. But if Sabathia ends up landing on the DL, that will obviously change.

Other than closer Aroldis Chapman, who remains sidelined with a rotator cuff issue, the Yankees haven’t had too many injuries to their pitching staff. A healthy pitching staff has helped propel the Yankees to 14 games over .500 and first place in the AL East.

Now Girardi and the Yankees have to turn their attention to finding a temporary replacement for Sabathia. Chad Green has started one game this season and would be the easiest to move into the rotation for a short period of time. Bryan Mitchell could also be called up to make a couple starts.

If Sabathia ends up missing an extended period of time, the Yankees could turn to Adam Warren. However, Warren has been so valuable out of the bullpen, the team may hesitate to do that. Prospects like Chance Adams and Caleb Smith are also options, although both would have to be added to the 40-man roster.

The silver lining for the Yankees is that everyone in their rotation other than Masahiro Tanaka has pitched well this season. The trio of Michael Pineda, Luis Severino, and Jordan Montgomery should help the Yankees cope with Sabathia going to the DL. However, a DL stint for the lefty will temporarily break up what has been the best rotation in the American League this season.