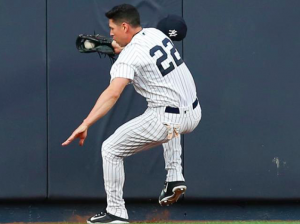 The New York Yankees have placed outfielder Jacoby Ellsbury on the 7-day concussion DL after the veteran outfielder crashed into the outfield wall during Wednesday’s win over the Royals. Ellsbury’s collision with the wall happened on the first play of the game when he made a spectacular catch on the warning track to rob Alcides Escobar of an extra-base hit. Ellsbury was on the ground for a few moments but was allowed to stay in the game, only to be removed an inning later after being diagnosed with a concussion and a neck sprain.

Yankees trainer Steve Donohue attended to Ellsbury along with manager Joe Girardi while he was still on the ground. Donohue reportedly gave Ellsbury smelling salt and declared him fine to continue. But the fact that he was later diagnosed yet allowed to stay in the game for the rest of the inning has become a bit controversial.

“He talked about like he felt like it was his neck that was bothering him a little bit, nothing to do with his head,” Girardi said after the game, defending the decision to leave Ellsbury in the game. “It was more like a whiplash. After coming in at the end of the inning, he went down (to the clubhouse) and Stevie went and talked to him and declared that we should probably get him out. And then he saw the doctors and they determined that he had a concussion.”

The controversy of not getting Ellsbury out of the game immediately aside, many of his teams applauded the incredible catch he made, setting the tone for the Yankees to shut out the Royals 3-0.

“It was incredible. Not too many people in the game make that play,” Yankees outfielder Aaron Judge said about the catch. “First pitch of the game, first guy up there, you’re still trying to get into the game and, ‘Crack!’ He got a good jump, a good read, and I don’t know how he held on to that ball.”

But in the aftermath of that outstanding catch and a possible misstep in concussion protocol, the Yankees now have to deal with the loss of Ellsbury for at least a week. Right now, the Yankees have no timetable for Ellsbury’s return, and with a strained neck hampering him in addition to a concussion, it’s possible that at some point Ellsbury will be moved to the normal 10-day DL.

Ellsbury is having perhaps his best offseason since coming to New York in 2014. He’s currently hitting .281 with an OPS of .771. He’s also been quite versatile, hitting in almost every spot in the lineup at one point or another. Aaron Hicks replaced Ellsbury in Wednesday’s game and is likely to take over his spot in center field for as long as Ellsbury remains on the DL. In a part-time role this season, Hicks is hitting .291 with eight home runs.

“We’ve got a lot of depth, and we’ve been tested early on,” said Yankees left fielder Brett Gardner. “We’ve got a lot of guys that can get the job done. Jacoby’s a guy that you can’t really replace on both sides of the ball, but Hicks obviously has been playing great and he’s going to step right in and we’ll just keep rolling along. Hopefully, Jacoby’s not out for long.”

The Yankees are yet to decide on who will take Ellsbury’s spot on the active roster. Mason Williams and Rob Refsnyder are the most likely candidates. If the Yankees believe Ellsbury’s stint on the DL will be brief, they will be unlikely to bring up top prospects like Clint Frazier or Dustin Fowler, both of whom are having productive seasons at triple-A.

“A lot of times when you have a situation where you feel it’s going to be short, you might do something different than if we felt it was going to be long,” explained Girardi.

The Yankees are currently 10 games over .500 and in first place in the AL East. They’ve reached the top of the division despite injuries to the likes of Didi Gregorious and Gary Sanchez. With Hicks and others capable of stepping in, the Yankees should be in good shape to survive the loss of Ellsbury. However, with Ellsbury suffering both a concussion and a neck sprain on his amazing catch, there is some degree of uncertainty with regard to when the Yankees will get him back.