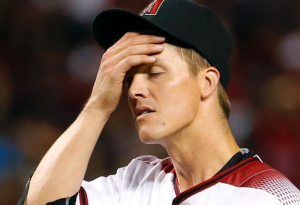 Just when he was starting to turn things around, it appears that Arizona Diamondbacks starter Zack Greinke has suffered a set back. Greinke left his start Tuesday night against the Philadelphia Phillies after just two innings due to what the team is calling tightness in his left oblique. Even worse is the fact that Greinke appears to have suffered the injury swinging the bat.

In the bottom of the second inning, Greinke hit a sacrifice fly with the bases loaded to drive in a run. When he went to warmup for the top of the third inning, Greinke says he felt something amiss, calling manager Chip Hale to the mound after two warmup tosses. With Hale watching him at the mound, Greinke threw three more warmup pitches at less than 100% and still felt something, which was enough for Hale to take him out of the game. The Diamondbacks would go on to lose the game.

“I was hoping to still pitch at a comfortable level, but it didn’t feel very good so we did what we did,” Greinke explained afterwards. He adds that coming out of the game “was probably the right move. I more than likely would have hurt myself a lot worse staying in.”

Hale says that Greinke will be re-evaluated on Wednesday, but noted that it’s important to be careful when dealing with an oblique injury. “It’s not worth taking a chance. It’s something that maybe he can miss a start, possibly not miss a start, possibly at the worst miss 15 days on the DL. You never know. But if you go out and really yank it bad, you’re talking about a month or two. So, we’ll hope for the best-case scenario.” Considering the nature of oblique injuries and the $206.5 million investment the Diamondbacks made in Greinke this offseason, a trip to the DL seems like a plausible course of action to ensure the injury heals fully.

The set back couldn’t have come at a worse time for both player and team. The Diamondbacks have lost four in a row and are desperate to get things turned around and climb back into contention for a playoff spot before it’s too late. As for Greinke, he has won seven straight decisions, with those seven wins coming in his last eight starts prior to Tuesday. During that stretch he has lowered his ERA from 5.26 to 3.62, a remarkable turnaround after a terrible start to his tenure in Arizona.

“I felt I’ve been pitching pretty good for a while and felt really good today,” Greinke said. “Hopefully it’s nothing major, we’ll find out more in the next couple days. Hopefully it’s nothing much at all and I can continue pitching good.” However, if the oblique injury turns out to be something substantial, it’ll be one more disappointment and one more thing that prevents both Greinke and the Diamondbacks from having the kind of year they envisioned when the season began.